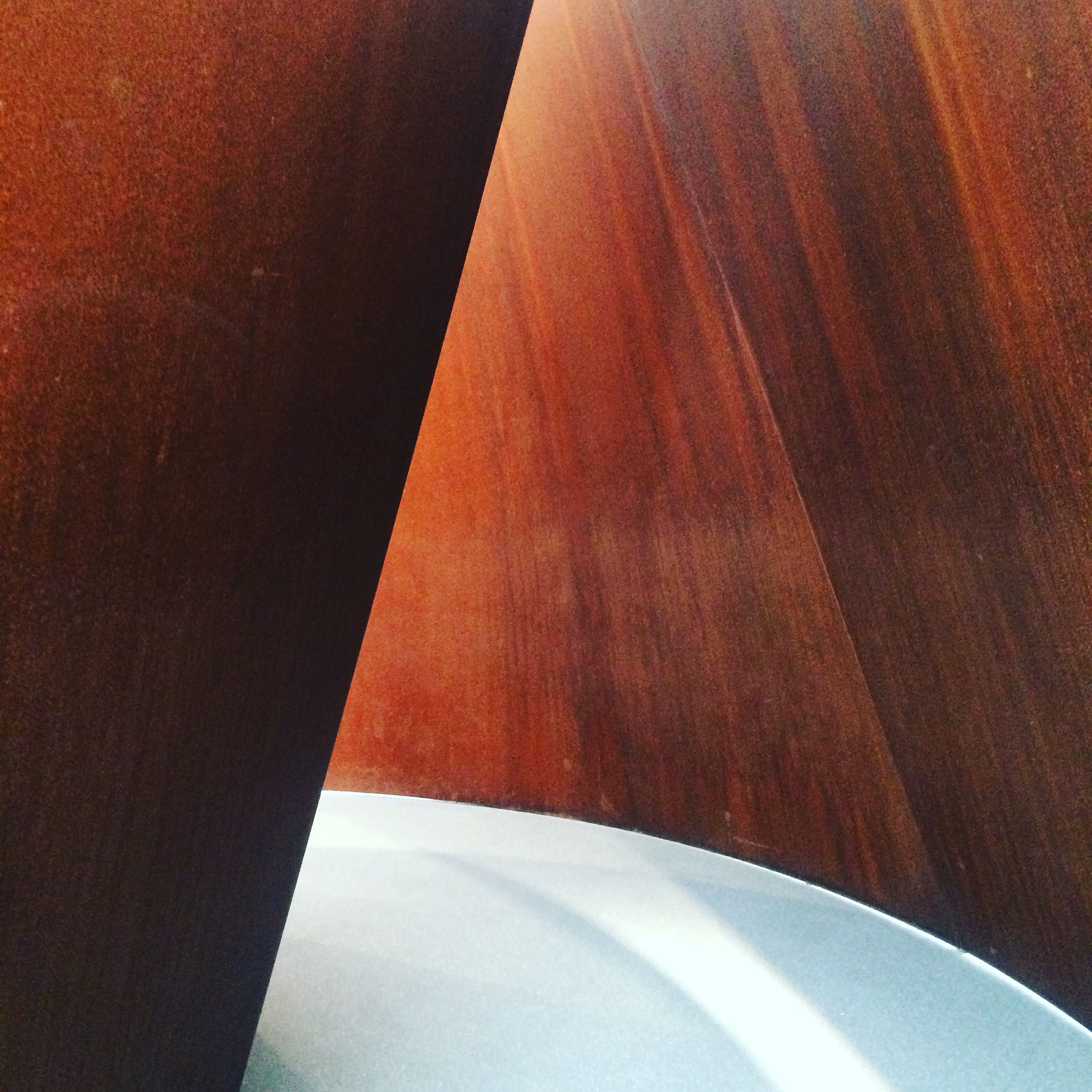 It has been a pretty hectic September for me so far, with lots going on. I am just back from San Francisco. It was one of those once in a lifetime things where Ken was going on business, I offered to carry his bags, and he said yes! We had a brilliant few days together but I also had lots of exploring time on my own. That’s how I ended up spending a fantastic day in San Francisco’s newly opened Museum of Modern Art.

There are a billion, well maybe a million pieces I could tell you about so I am going to try and limit it to just a few and start with the one that since coming home, I am still thinking about. That is Richard Serra’s sculpture, Sequence.

The piece, made in 2006, is massive. It’s 13 feet tall and it weighs over 235 tonnes made from weatherproof steel. It is so big in fact, that it is now in it’s permanent home in San Francisco where the museum wing had to be completed once the piece was in place.

Sequence is formed with two torqued ellipses or curves are connected with an S shape. In the centre of the sculpture the S shape reverses itself so as you walk around it you have the disorienting feeling of walking in the wrong direction even as you walk forward. Here is an aerial shot of it in it’s previous home of Stanford University.

In an interview in 2011 Serra dismissed the idea that there was a correct way to interpret his work saying; “this isn’t here to teach you anything, it is your experience and the private thoughts it engenders that are your private participation with this work.” I love that sentiment as the sheer size of this alone can’t help having an effect on you but at no point did I think, what is he trying to say because I was so engrossed in how it made me feel. The psychological effect was at times overwhelming, but it is an emotion that will stay with me for a long time I imagine.

Here are a couple of close ups to show the difference in the textures on the steel. This is the first time it has been displayed indoors having spent the last three years in Palo Alto.

I am not sure if the photos do it any justice at all but hopefully they give you an idea of the shapes and the scale he used. I do think it has to be walked around to fully appreciate it. So that’s it, you have to go to San Francisco and check it out and yes, before you ask, I am free to carry your bags 🙂

Since being back I have been working away at the easel. I will have some new work to show you next week but in the meantime, keep flying that kite!